As Adama Jarju explains how increased internet access can help his country, Gambia, out of poverty, his electricity cuts out and the Skype interview is disconnected.

“Most of my people are poor … my family included. Most of us have no access to a computer,” Jarju, who lives in the village of Makumbaya, told VOA.

Jarju was one of three students out of 150 from his village to complete high school. He is planning to attend university in the United States — with the hope of bringing the internet to his country.

“It will help them rise out of poverty,” he said.

His sister Awa — the second of the three high school graduates — sits next to him. She plans to pursue a degree in marketing in the U.S., then return home and start a hotel to create jobs, particularly for women.

“I want to come back to my country so that I can create a lot of jobs for my people,” she said. “The education here is not as advanced. So I have to dream of going to the United States.”

Brother and sister are benefiting from the Starling Sponsorship Program — started by Ashleigh DeLuca, who taught at their school for three months nearly a decade ago. 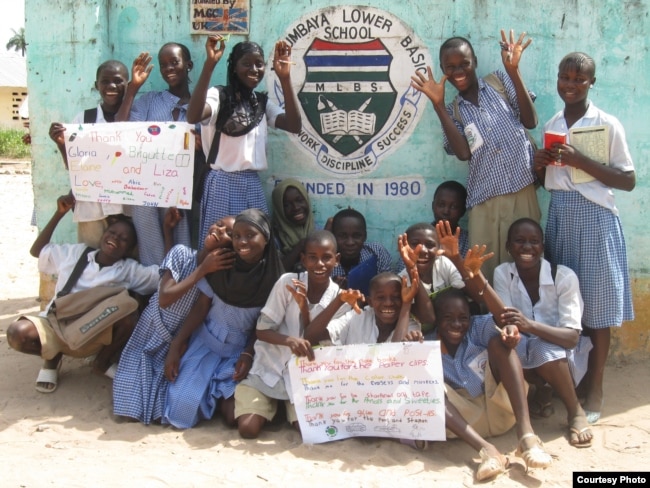 Students at the Makumbaya Lower Basic School in the Gambia. (Courtesy photo)

The program paid annual school fees of 16 selected children as long as their parents promised to keep them in school. But continuing their studies simply was not possible for a lot of children in the West African nation.

The Jarju siblings and their classmate Penda Jallow, all of them 23 years old, defied obstacles, though, to earn their high school diplomas.

“Me and Awa, we are very grateful that we have supportive parents. To them, education is the key to success,” Adama Jarju said.

DeLuca’s family also taught her the importance of education at a young age.

As a Colombian immigrant in the United States, DeLuca’s grandmother did everything she could to keep her children in school, instilling in them the belief that education was their pathway to a better life.

Her grandmother’s hard work and her mother’s commitment to her own studies inspired DeLuca as well. At the age of 17, she traveled to Gambia to teach schoolchildren, and after three months decided to start the program to help those who truly wanted to learn.

DeLuca said she is incredibly proud of the three students who made it through — and even prouder that they want to further their education.

“When we started this, we didn’t even talk about college,” she said.

The three students all have been accepted to a number of private universities in the U.S., but now face challenges in getting there — especially in regard to funding.

“Right now, we are having a tough time,” Adama Jarju said, as he and his sister wait to hear if they will have adequate funding to travel to the U.S.

“I dream of finishing my education in the United States,” his sister said. “That will be a great opportunity to me … new people, new culture … it would be a great thing to learn more about the world and how the world is moving.”

And despite the uncertainty of their funding, Ashleigh DeLuca and the students all are confident they can achieve this dream.

On Bees and Beefs: Letter to my Friend (Part 1)

Watch this stream over RTSP for Android Mozilla
0FansLike
3,374FollowersFollow

On Bees and Beefs: Letter to my Friend (Part 1)

STORY OF THE WEEK

Banjul Deaths: INVESTIGATION ON A DEAD BODY FOUND ALONG THE MANGROVE...